Leonard Paul attained his Master's Degree in Game Audio with CNAM in Paris, France in 2017. He received his Honours degree in Computer Science at Simon Fraser University in BC, Canada with an Extended Minor in Music concentrating in Electroacoustics. He began his work in video games on the Sega Genesis and Super Nintendo Entertainment System and has twenty plus year history in composing, sound design and coding for games working for companies such as Electronic Arts, Backbone Entertainment, Radical Entertainment, moderngroove entertainment, Rockstar Vancouver and Black Box Games. He has worked on over twenty major game titles totalling over 6.4 million units sold since 1994, including award-winning AAA titles such as EA's NBA Jam, NHL11, Need for Speed: Hot Pursuit 2, NBA Live '95 as well as the indie award-winning title Retro City Rampage. [+] 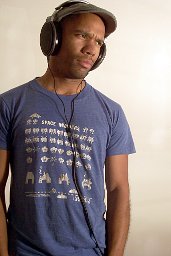 In recent years, he has broadened his attention within the field of game audio to include game audio education is the Director of the School of Video Game Audio, founded in 2012. He has published papers in academic journals and has contributed chapters to books focusing on video game audio such as Karen Collins' From Pacman to Pop Music. He is also a new media artist whose solo and collaborative work has been exhibited in cities including Surrey, Banff, Victoria, São Paulo, Zürich and San Jose. As an electronic music artist he has performed in cities such as Osaka, Berlin and Amsterdam.

Paul is a well-known documentary film composer, having scored the original music for multi-awarding winning documentary The Corporation which remains the highest-grossing Canadian documentary in history to date. He also scored the music for the documentary Beep: A Documentary History of Game Sound by Karen Collins.

He is an internationally renowned speaker on the topic of video game audio and has been invited to speak at at the Game Developer's Conference eight times since 2003. The Audio Engineering Society, AMAZE Festival, Banff New Media Centre, Interactive Futures Conference and several universities have requested his lectures as the field of games continues to grow. In the recent past he has delivered lectures in Vancouver, Stanford, Lyon, Berlin, Bogotá, London, Banff, San Francisco, San Jose, Porto, Angoulême and other locations around the world.

His lectures and writings are available online at: http://www.VideoGameAudio.com